Please review as many of these as possible before the conference

Hijacking the US Economy for generations to come 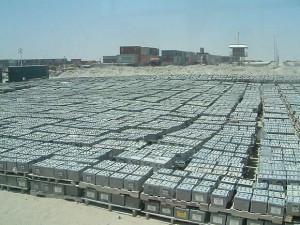 Storage depot in Kuwait where used up vehicle batteries, tires and much else awaits refurbishment

WASHINGTON – The wars in Iraq and Afghanistan could cost as much as $2.4 trillion through the next decade, the nonpartisan Congressional Budget Office said yesterday. The White House brushed off the analysis as “speculation.”

The estimate was the most comprehensive and far-reaching one to date. It factored in costs previously not counted and assumed that large number of forces would remain in the regions.

According to the analysis, the United States has spent about $604 billion on the wars, including $39 billion in diplomatic operations and foreign aid.

If the United States were to reduce the number of troops deployed to Iraq and Afghanistan to 75,000 six years from now, it would cost the United States $1 trillion more for military and diplomatic operations and $705 billion in interest payments to pay for the wars through 2017.

Democrats, who say voters will not stand for it, would consider funding the military campaigns in short installments, instead of full one-year terms.

“That estimate is a far cry from the administration’s original claim of a $50 billion price that the Iraqis could pay themselves,” said House Speaker Nancy Pelosi, Democrat of California. “The depth of this tragedy is stunning, particularly for our military families – and for prospects for peace in the region.”

The White House contended the estimate was too conditional.

“It’s just a ton of speculation,” said White House press secretary Dana Perino. “We don’t know how much the war is going to cost in the future.”

President Bush has asked for $196.4 billion for war-related operations this budget year, which began Oct. 1.

Democrats say they are unlikely to act on the request until early next year, calculating the Pentagon can cover war costs through February or March by borrowing against its annual budget.

Military officials say doing so can disrupt vital programs, such as base support and training exercises, and cost more money in the long run.

Senator Carl Levin, chairman of the Senate Armed Services Committee, said Democrats are considering approving the war spending six months at a time. Such a bill would require that Bush renew his request after a certain point, possibly in May or June, said Levin, Democrat of Michigan.

“That would put some pressure on the president to have a timetable,” Levin told reporters at a breakfast yesterday.

At the same time, providing the money would avoid sending a “negative message to the troops,” he said.

In recent months, Democrats have been divided on whether to continue paying for a war they oppose or cut off the money and be attacked politically for refusing to support the troops. Other legislation that would set a deadline for troop withdrawals has failed to attract enough Republicans, repeatedly short of the 60 votes needed to pass the Senate. “We are still working on a formula to get us to 60″ votes, Levin said.